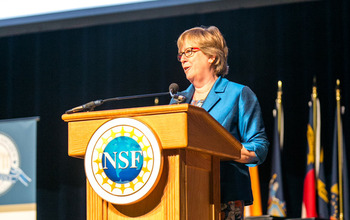 This year, the White House honored 213 recipients of the Presidential Awards for Excellence in Mathematics and Science Teaching (PAEMST). In September, those awardees traveled to Washington, D.C., where leaders in science, technology, education and mathematics (STEM) congratulated them in person.

"By virtue of receiving a PAEMST award, each of you is recognized as a model for your colleagues, an inspiration to your students and communities, and a leader in the advancement of math and science education," France Córdova, director of the National Science Foundation (NSF), told the assembled recipients.

The awards are the highest honor bestowed by the government on K-12 mathematics and science teachers. NSF receives recommendations from states and territories of some of their best and most inspiring teachers, then reviews the submissions and forwards recommendations to the White House Office of Science and Technology Policy (OSTP).

"I'm sure you all know how important your job is, how enormous a difference a good teacher makes, how you are changing lives one student at a time," OSTP Director John P. Holdren, assistant to the president for science and technology, told the group. "I think virtually every successful scientist, engineer and mathematician I know can remember a particular teacher who made a difference in his or her life. I know I do."

Awardees told NSF that they focus on creating classroom experiences that go beyond memorization of scientific facts and equations, helping students build affinities for science, technology, engineering and mathematics (STEM).

"Our group of awardees demonstrates excellence in these areas," she said.

This year's awardees include 108 kindergarten- to 6th-grade teachers and 105 seventh- through 12th-grade teachers. Each received $10,000 from NSF and an expense-paid trip to Washington, D.C. President Obama announced their names earlier this year, and OSTP posted a blog about their experiences during their trip. Highlights from this year's events include:

The Symposium on Active Learning in STEM Education and Next Generation STEM High School Forum were organized by NSF and the Center for Innovative Research on Cyberlearning at SRI International.

NSF has hosted the PAEMST program on behalf of OSTP since 1983. Applications for the next round of seventh through 12th grade teachers open in the fall of 2016. Nominations are accepted at the PAEMST website.