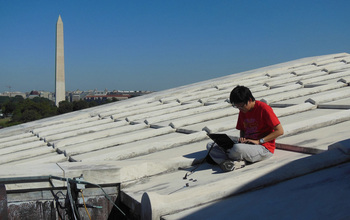 Yilin Wu downloads data from a temperature "ibutton" on the roof of the Jefferson Memorial.

Over the past decade, a dark substance has tarnished the bright white dome of the Jefferson Memorial in Washington, D.C. Despite appearances, it's not just dirt and grime.

The mysterious dark substance, a coating of microorganisms called a biofilm, is showing up on monuments and buildings around the globe. In some cases, it has been on these structures for a long time. It's possible that being exposed to the elements has altered the dome of the Jefferson Memorial over the past decades, even creating tiny pockets in its marble that are favorable for bacterial growth.

One team is now using the Jefferson Memorial as a research site, collecting biofilm samples as they work to produce a new mathematical model to predict how and where these organisms grow.

According to Isaac Klapper of Temple University, biofilms essentially consist of "microbes stuck in sticky stuff in a favorable place." Biofilms include things like dental plaque, algae on river rocks, and the substances that clog pipes and drains, Klapper said.

"In some sense, they run the earth. They are sort of a universal thing," he said. "Biofilms seem to have started almost at the beginning of life; it's been a really effective life strategy."

These bacteria work in communities to extract energy from a source (often sunlight or organic matter) and cycle the energy in geochemical cycles. "Anywhere there is chemical-free energy, bacterial genes are out there to take advantage of it," Klapper said.

Beginning in the early 1980s, biofilm models started as simple, single-species models but have since developed into complex, multiple-species models. Mathematicians have refined these models to more accurately reflect bacterial growth in nature. Over the past 15 years, advances in technology have facilitated faster, cheaper sequencing of genomes, sparking a revolution in the field of microbiology.

"There is a huge amount of information being produced," Klapper said. "The question is, what do we do with it?"

Klapper, Zhang and their teams add genome sequencing data to their models and combine it with information about the biofilms' environments. Incorporating genetic data makes the models more accurately reflect the growth of the biofilms. Sequencing a bacterium's genome tells you what sequences control what capabilities in the organism. Knowing which gene is turned on allows scientists to see how it works in the larger context of the microbial community.

Researchers traditionally use this type of genomic modeling with data gathered in laboratories, environments that are isolated and controlled compared to something like the Jefferson Memorial, which is exposed to sunlight, rain, air and many different organisms. The researchers have benefitted from a nearby weather station that collects temperature, humidity, and sunlight data, which they use to adjust their models even further.

While mathematicians aren't often regarded as field researchers, this team gathered data from the memorial with the idea that it reflected a biofilm's environment better than a lab setting and would result in more realistic models.

"We were really excited to see mathematicians tackling a project in which novel and sophisticated mathematical modeling is crucial," said Rosemary Renaut, an NSF program director for mathematical biology. "This modeling demonstrates the extent to which the function of a microbial community in a given environment is characterized through knowing the environment's physical and chemical profile."

Biofilms might cause erosion or damage to the memorial, but some research suggests they might form a protective layer on the stone. "There is no definite answer yet," Zhang said. "It's really unknown whether biofilms are helpful or harmful for the memorial," he said. "It's also possible that, because of the huge variety in biofilms and the environments they live in, that in some cases biofilms could be beneficial, and in other cases they could be harmful."

Klapper added that most of the time, biofilms "are very much to our benefit." For example, the bacteria that live in the human gut often aid in digestion.

"The negative aspects of biofilms, such as affecting the aesthetics of monuments, are really the exceptions," he said. "And with a better understanding of biofilms, perhaps in the future we will know whether the biofilms should stay or go on monuments around the world."

Renaut said the Jefferson Memorial research is part of a larger goal for the team: developing a methodology that would help refine models used for studying other biofilms.

"The research techniques involve developing new mathematical methodologies that could potentially be applied beyond the current project," Renaut said.