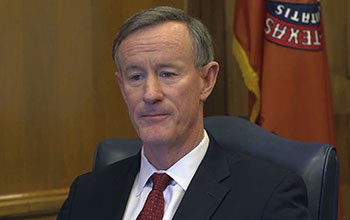 Today, the National Science Foundation (NSF) is usually associated with supporting scientists who go on to win Nobel Prizes, leading exploration of the planet's polar regions and enabling discoveries about the universe, from the subatomic world to distant galaxies. But the foundation also has ties to national defense that go back to its beginnings, as a product of the U.S. government working to enhance security during and after World War II. The National Science Foundation Act of 1950 called for the creation of an agency to "promote the progress of science; to advance the national health, prosperity, and welfare; and to secure the national defense."

And so NSF began.

"It was a time when many -- including NSF's founder, Vannevar Bush -- recognized the value of science and the need to foster its growth," said NSF historian Leo Slater. "Fundamental scientific research was important then, as it still is today, in fostering innovation and driving new applications that help the entire nation, including the military."

NSF's federal partners, like the Defense Advanced Research Projects Agency, the Army Research Lab, the Air Force Office of Scientific Research, the Office of Naval Research and the Naval Research Laboratory, focus on security-related research with an eye toward specific applications. That applied research, however, relies on a steady supply of basic research -- work that expands the scientific community's understanding of fundamental phenomena. Basic research is where NSF serves as an important asset for national security, laying the groundwork for later applications.

Long ago, Vannevar Bush wrote something that remains true today: "It has become clear beyond all doubt that scientific research is absolutely essential to national security."

Kit Parker is an Army Reserve lieutenant colonel who has served multiple tours of duty in Afghanistan. He is also a bioengineer at Harvard University. With NSF funding, Parker studies the strength and elasticity of spider silk fibers to build a lighter, more flexible bulletproof vest without compromising protective features.

Many dismiss extremists as psychopaths. But, based on interviews with extremists in war zones, University of Michigan anthropologist Scott Atran and psychologist Jeremy Ginges from The New School in New York City have found the truth is more complicated. With NSF support, Atran and Ginges conducted studies across six continents, observing, interviewing and studying people in war zones, as well as peaceful neighborhoods, to learn what drives a person to violent extremism. The work led to findings that could help with the development of strategies to disrupt recruitment. The Department of Defense and other agencies are now using this research to better counter violent extremism.

Whether it's mapping to a rendezvous point, keeping a fighter jet on course or developing missiles with precision accuracy, GPS is an essential tool for today's military that relies on fundamental physics. Einstein's theories of relativity provide the relativistic corrections that ensure the kind of accuracy the military has come to rely on in its GPS devices. Without those corrections, GPS localization would accumulate errors at a rate of 10 kilometers a day. NSF-funded theoretical and experimental physics research helped provide the foundation for those more accurate systems. The agency continues its support today, funding work to enhance GPS accuracy through means such as improved atomic clocks.

If you can think it, you can do it -- at least, that could be the adage for Jose Contreras-Vidal, a professor formerly with the University of Maryland, College Park and currently with the University of Houston. He and his team have created a non-invasive, sensor-lined cap that forms a brain-computer interface that could one day control computers, robotic prosthetic limbs, motorized wheelchairs and even digital avatars. This advance could significantly improve how vets adapt to prosthetics of the future.

Treating traumatic wounds on the battlefield poses incredible challenges. Controlling bleeding is one of the first priorities, but when medics are dealing with torso injuries, they can't use traditional compression methods. To address this life-threatening problem, small business Remedium Technologies is using NSF funding to develop a product called Hemogrip, a biopolymer foam in a handheld, lightweight canister. The sprayable foam would expand in a wound, adhering to tissue and sealing it, thereby minimizing blood loss and saving soldiers' lives.

Software helps military veterans with PTSD, depression and other issues

As much as 77 percent of returning military personnel don't get the treatment they need due to a lack of adequate available resources, combined with a fear of stigmatization inherent in seeking face-to-face treatment. With support from NSF, former Navy pilot Rich Gengler, former Army Sgt. Justin Savage and the team at Prevail Health Solutions have built and tested an online screening and counseling program called VetsPrevail. Optimized through careful research, the program helps service members returning from Iraq and Afghanistan make a more successful transition back to civilian life.

With funding from NSF, Tak-Sing Wong and his team of Penn State University researchers have developed a versatile technique to detect very small numbers of molecules from chemicals and biological species in gaseous, liquid or solid samples. Their sensor platform combines laser-based Raman spectroscopy -- a technique used for identifying substances by finding their molecular "fingerprints" -- with a slippery surface based on that of the carnivorous Asian pitcher plant. The slick surface allows users to concentrate samples, making the target molecules easier to find. This technology opens the door to improved detection of environmental contaminants, biological agents and chemical explosives, offering many potential applications in national security.

What if we could more accurately predict where conflict will arise next? What if we could tease apart the variables most likely to lead to war? A team of researchers, including political scientists Skyler Cranmer of Ohio State University, Bruce Desmarais of the University of Massachusetts Amherst and statistician Shankar Bhamidi of the University of North Carolina at Chapel Hill, developed a new method of modeling international conflict. The researchers say their technique can predict where conflicts will occur five and even 10 years into the future -- better than any existing model.