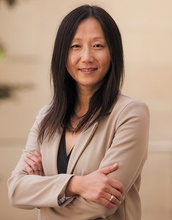 Stanford University's Zhenan Bao takes on research challenges that she knows are many years away from reaching the general public: new and inexpensive solar cells, ultra-sensitive explosives detectors, sensors that can detect something as light as a fly landing on them, and flexible sensor "skin" that could one day be wrapped around prosthetic limbs. Bao, who was born in China but moved to the U.S. during college, has been supported by several National Science Foundation (NSF) awards. She says she likes to stay focused on pushing the boundaries of what's possible in fundamental science -- it keeps her creative.

Bao recently delivered a talk on "Skin-inspired electronic materials and devices" as part of the NSF Distinguished Lectures in Mathematical and Physical Sciences series. After her lecture, Bao expounded on the impact of fundamental research, the scientific creativity afforded in a university setting, and thinking short term and long term simultaneously.

I was always good at physics and math, but I didn't really like them.

When I started chemistry in high school -- mixing things, watching the color change -- that's what I enjoyed. And then I went to college and in organic chemistry lab, we were graded by how much of a compound you could produce, and I always had the highest yield. I found I was really good at this.

My father is a solid state physicist, and he had those colorful silicon wafers for integrated circuits. I was about 5 -- I didn't know what the wafers were for, but I could easily crack them into small pieces, and I knew they were crystals. That's actually how I first learned what a silicon chip was. My mother, who was a chemist, had squeeze bottles of distilled water, and those were always fun to play with too. But in the '80s in China, we mostly played outside with friends, jumping rope or feeding the chickens. There were a lot of chickens running around.

My kids are into making things; they enjoy learning when it's related to something they make. When they wanted a hamster, I said "You can get the hamster if you build a house for it." So now, they're working on designing and building a house for a hamster.

I tell my students the most important thing is to learn how to manage your time and to be very selfish with it. With that in mind when they design experiments, they will think, "How do I maximize each experiment?" You don't want to have to go back and do the same thing again because you didn't include the right control or you didn't combine experiments when you could have. They then adopt that approach to other areas of their education, becoming really selective of the activities they pick as they determine their focus.

I really enjoy talking to people from different backgrounds. There are always new things I discover that become inspirational.

What should drive my research? If my driver is something that industry is already working on to come to market in the next 5 to 10 years, I don't have room to be creative. That's when I started to use artificial skin as a driver. I found I could be creative because it is something far away from being realized. That made my team think about requirements for electronics that don't exist. Then we sometimes found applications for our new materials and devices that are more current. So we're talking about transferring technology in the near term even though our original plan is actually long term. It's become my research strategy.

I want to do things that really impact people's lives, but I also balance this with a focus on fundamental science.

When we can publish in Science and Nature, and at the same time also have companies excited, that means we're doing it right.

My goal is to develop fundamental knowledge. I'm in a university; my goal is not commercialization. Frequently, I have to be very critical about what's at the root of what I'm working on. The projects should provide fundamental knowledge that simultaneously can advance technology. That's a challenge, but it's also what gives me the most joy.

Some of my research will take years before it's used in applications, like taking the artificial skin and connecting it to nerves. Maybe by the time I retire. If I can make that happen, that will be pretty good!

That's the beauty of being in academia. We can dream things.