Is the coast clear? Not in many beachfront areas 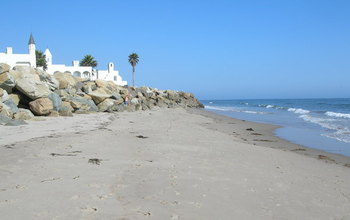 Large rock revetment in the intertidal zone of a sandy beach in Santa Barbara County, California.

For nearly a century, the O'Shaughnessy seawall has held back the sand and seas of San Francisco's Ocean Beach. At work even longer: the Galveston seawall, built after America's deadliest hurricane killed thousands in Texas in 1900.

These are just two examples of how America's coasts -- especially those with large urban populations -- have been armored with human-made structures.

Though these structures help protect communities against natural disasters, these "lines in the sand" limit the ability of the shoreline to respond to changes in sea level and other coastal processes.

Recent research on the resulting ecological effects has largely been conducted in specific settings, making it difficult to generalize the results across ecosystems and structure types.

The team's findings appear online this week in a paper in Estuaries and Coasts, and will be published this fall in a special issue of the journal.

"This is one of the first attempts to assess how engineering structures on beaches and other sedimentary environments affect the biota that inhabits these locations," said David Garrison, an LTER program director at NSF, which supported the research. With some 40 percent of the nation's human population living in coastal counties, Garrison noted that the study is very timely.

The type of armoring structure varies widely according to the environmental setting, ranging from huge seawalls and revetments along the wave-exposed open coast to smaller bulkheads and human-designed oyster reefs in tidal marshes and estuaries.

"The size and shape of these structures often result in the loss of intertidal habitats," said lead author Jenny Dugan, a biologist at the University of California, Santa Barbara (UCSB). "The extent of that loss is related to the environmental setting, structure type and how far seaward and along the shore the structure extends."

Scientists at three LTER sites have been working on the ecological impact of coastal armoring. At NSF's Santa Barbara Coastal LTER site, studies of seawalls on open coast beaches have revealed significant ecological effects on marine species, including birds. Researchers at the Georgia Coastal Ecosystems LTER site have conducted studies of small-scale armoring in salt marshes. And investigations at the Virginia Coast Reserve LTER site have focused on the use of oyster reefs and living shorelines as coastal protection strategies.

"What's new about this cross-site collaboration is putting these site-specific studies into perspective by making comparisons across a broad range of habitats," said paper co-author Merryl Alber, a marine scientist at the University of Georgia and principal investigator of the Georgia Coastal Ecosystems LTER site.

The study synthesizes the findings of existing literature, examining different types of armoring across a variety of soft sediment ecosystems. The scientists used those data to evaluate a new conceptual model.

"Our model looks at the environmental setting of the armoring structure in terms of hydrodynamic energy, like waves and tides, and the degree to which a structure was built to slow water movement or stop it from getting through," Dugan explained. "We then reviewed results from a wide spectrum of studies in the literature and used that information to evaluate how well our model could predict the ecological effects of armoring."

Of the 88 studies the researchers reviewed, the majority had been conducted in very low-energy environments -- predominantly salt marshes and tidal creeks, and also mangroves -- and about one-quarter in medium-energy systems, such as harbors, river mouths and estuaries. Only 15 percent focused on high-energy environments, mostly open coast sandy beaches.

Six categories of ecological responses had been examined in previous studies; negative effects of shoreline armoring were reported in all six. The existing literature focused largely on changes in habitat and species distribution, leaving questions about how shoreline armoring affects other ecological responses such as nutrient cycling, connectivity, productivity and trophic structure.

"Our review not only revealed major gaps in knowledge, but also highlighted the fact that existing information on ecological responses to armoring is unevenly distributed across soft sediment habitat types and does not necessarily cover the range of potential environmental and armoring contexts," said paper co-author Kyle Emery of UCSB.

According to Dugan, as sea level continues to rise, existing coastal armoring structures are likely to experience greater hydrodynamic energy, such that of waves and tides, regardless of their environment. That will magnify ecological effects in many settings, she said.

Dugan noted that the model generated useful predictions of the direction and relative effect of different types of shoreline armoring across soft sediment ecosystems.

"Understanding how these ecological responses vary with hydrodynamic energy, and their effect on water flow, could help people design and install armoring structures that could have fewer ecological effects," she said. "Then their options would include the cost of the structure, and an idea of the ecological implications of the type of structure based on the environmental setting."

Other co-authors of the paper are Clark Alexander, James Byers, Alyssa Gehman and Natalie McLenaghan, all of the University of Georgia, and Sarah Sojka of Randolph College in Lynchburg, Virginia.