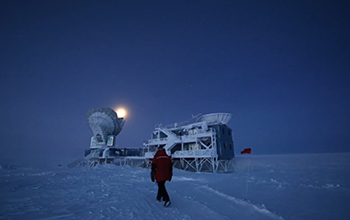 
Man makes history at the bottom of the world!

The idea of spending six months in the darkness of a South Pole winter may not appeal to many -- it involves ice as far as the eye can see, sub-zero temperatures and no flights in or out, from February to October.

But none of that has deterred astrophysicist Robert Schwarz of the University of Minnesota-Twin Cities College of Science and Engineering. He holds a place unique in history: Over the past 22 years, he has spent 14 Southern Hemisphere winters at the pole, more than anyone who has ever lived. Though others have come close over the decades, Schwarz holds the record.

"It's an absolutely amazing place," he said.

Every year, roughly 50 people winter at the National Science Foundation's (NSF) Amundsen-Scott South Pole Station, keeping the station and its many world-class experiments up and running.

Positioned atop the Antarctic ice sheet at an elevation of 9,300 feet, the station makes for an ideal location for experiments and observations using instruments, including the 10-meter South Pole Telescope. The location offers a position at the center of the Earth's rotation, a lack of light pollution and cold, clean air that provides a baseline for studying the atmospheric accumulation of various gases -- including carbon-dioxide -- over decades.

Even the miles-thick ice sheet itself serves as a perfect medium for science -- its crystal clarity makes an ideal medium for NSF's IceCube Neutrino Observatory, which detects the signatures of subatomic particles interacting with frozen water.

NSF manages the U.S. Antarctic Program, overseeing Amundsen-Scott and two other U.S. research stations. Prior to the program's establishment, the first U.S. expeditions to spend the winter at the pole consisted of scientists and U.S. Navy personnel -- all of them men -- in the 1950s. Since 1957, a total of 1,551 people -- men and women -- have wintered there. Some have done so more than once, but none as many times as Schwarz.

Schwarz, who originally hails from Germany, started working at the South Pole more or less by chance. One day, while waiting to talk to his professor at the Max Planck Institute for Physics, he spotted an unusual job posting.

"They were looking for someone to winter at South Pole, and I thought 'Wow that sounds pretty amazing,'" Schwarz told Mike Lucibella, editor of the Antarctic Sun newspaper, published by NSF. "I emailed to get more information and I got a one-liner back that I should send a curriculum vitae and three references, and I did that and a week later they offered me the job."

Taking time away from his graduate school to spend a winter overseeing science experiments at the South Pole was a bit of an unorthodox career move, but certainly not one he regrets.

These days, he serves as winter overseer for the Keck Array, a cluster of microwave telescopes at the geographic South Pole. Those instruments are observing the echoes of the Big Bang embedded in the Cosmic Microwave Background, the oldest light in the universe. In a way, Schwarz is like a doctor for the Keck Array, performing continual checkups to keep it running smoothly and fix it if something breaks down.

"It's stuff I love to do, like the hands-on science," Schwarz said. "I always preferred a soldering iron or wrench. I don't too much like writing papers. I'm just trying to keep stuff running and if it doesn't run try to find out why, what is wrong, fix it. And of course, you never have all the spare parts you want, and so you have to improvise. So that makes it kind of difficult but also very interesting and rewarding."

Schwarz keeps himself busy in his off-hours with activity nights, classes taught by other station residents and sports leagues in the gym. Life at the bottom of the world is rarely boring, he said.

"It's like 'Oh no, today there are already two things. Am I going to go to movie night or will I go to board game night?'" Schwarz said.

He also teaches a 13-week introduction to astronomy class. For the same reasons that make the South Pole skies perfect for scientific study, it's the ideal location for some amateur stargazing. The skies above the pole are some of the most spectacular in the world. Throw in some of the globe's most dramatic multicolored auroras and there's almost nothing in the world that compares to the light show overhead.

What's next for the record holder? Will he return to the South Pole for yet another season?

"I'll take a break and next year will be my last winter," Schwarz said. Northern and Southern hemisphere winters are at opposite ends of the year so, he noted, he's spent years essentially flying from one winter into another. "During my two-and-a-half months off, it's winter at home. So I definitely have to catch up on some summers."