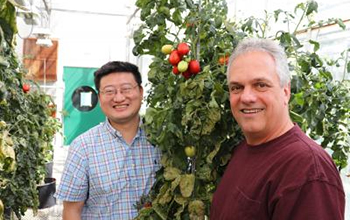 Scientists Zhangjun Fei and James Giovannoni with tomatoes in a greenhouse.

Tomato breeders have traditionally emphasized improved production, such as larger fruits and more fruits per plant, so some traits that improved other qualities, such as flavor and disease resistance, were lost.

NSF-funded researchers at the Boyce Thompson Institute (BTI) in Ithaca, New York, and partnering institutions have created a pan-genome that captures all the genetic information in 725 cultivated and closely related wild tomatoes, a resource that promises to help breeders develop more flavorful and sustainable varieties.

As reported in Nature Genetics, the biologists found 4,873 new genes and identified a rare version of a gene that can make tomatoes tastier.

"Breeders can explore the pan-genome for genes of interest, and potentially select them as they do breeding to improve their tomatoes," said BTI geneticist Zhangjun Fei.

The tomato pan-genome could benefit the economy and consumers, according to Clifford Weil, program director for NSF's Plant Genome Research Program.

"How many times do you hear someone say that tomatoes from the store just don't quite measure up to heirloom varieties?" Weil asked. "This study gets to why that might be the case and shows that better-tasting tomatoes appear to be on their way back."

The European Research Area Network for Coordinating Action in Plant Sciences collaborated in funding the research.