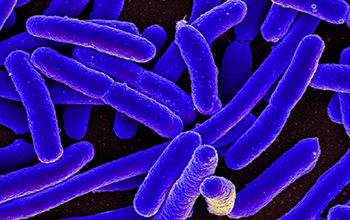 A tiny obstacle course for bacteria has shown researchers how E. coli changes its behavior to rapidly clear obstructions to food. The work holds implications for biology and medicine, and for robotic search-and-rescue tactics.

Scientists at Carnegie Mellon University (CMU), the University of Pittsburgh and the Salk Institute for Biological Studies report in Proceedings of the National Academy of Sciences that the "swim and tumble" behavior bacteria use to move toward food or away from poisons changes when the bacteria encounter obstacles.

"In the real world, bacteria always encounter lots of obstacles," said Ziv Bar-Joseph of CMU's Computational Biology and Machine Learning Departments. E. coli, for instance, inhabits the complicated terrain of the gastrointestinal tract. Yet previous studies of chemotaxis -- the way bacteria move toward a higher concentration of food or away from concentrations of poisons -- usually have been done in unobstructed chambers.

The researchers designed tiny microfluidic chambers and placed evenly distributed square and round obstacles in them. When the scientists tested E. coli inside these obstacle courses, they were surprised at the speed at which the bacteria found a food source.

Bacteria are known to communicate with each other by secreting chemicals. The communication informs bacteria as they try to get around an obstacle. A closer look at the bacteria, however, also showed a change in behavior.

The findings have implications for tracking how malignant cells spread through the body or how infections might be treated, Bar-Joseph said.

The researchers developed a model to account for this newly discovered behavior, and to better predict the bacteria's performance. Beyond biomedicine, applying the model to swarms of robots looking for trapped victims in emergencies has shown that it can reduce search time.

"This model is a template for new approaches to solving complex problems," said Jennifer Weller, a program director in NSF's Division of Biological Infrastructure, which funded the research. "Finding out how bacteria quickly get to food is contributing to solutions for many human problems, including better ways of conducting search and rescue missions."