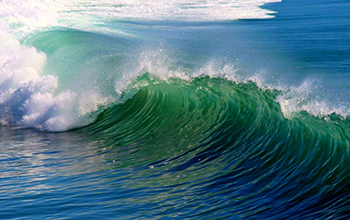 A new enzyme has been discovered in giant ocean viruses.

Results of a new NSF-supported study led by researchers at the Woods Hole Oceanographic Institution and Swansea University Medical School increase our knowledge of viruses -- in the sea and on land -- and their potential to cause life-threatening illnesses.

The findings, which describe newly identified genes in mysterious "giant" ocean viruses, could lead to new drug targets for viruses linked with human diseases. The work is published in Proceedings of the National Academy of Sciences.

P450 enzymes are common in animals, plants and bacteria, but finding them in new viruses was unexpected.

"In animals, P450 enzymes metabolize drugs, make steroid hormones, and defend against pollutants," says biologist John Stegeman, senior author of the paper and director of the Woods Hole Center for Oceans and Human Health, which is jointly funded by NSF's Division of Ocean Sciences and the National Institute of Environmental Health Sciences. "We have yet to find out what the enzymes are doing in these viruses, but they are unique, unlike P450s in any other organism."

Adds David Lamb, lead author and a scientist at Swansea University Medical School, "We know that giant viruses may be linked with some forms of pneumonia, so gaining a better understanding of them will help us develop ways of tackling those viruses."

Finding P450 genes and enzymes in diverse viruses opens a new window on the evolution of these important enzymes, Stegeman says.