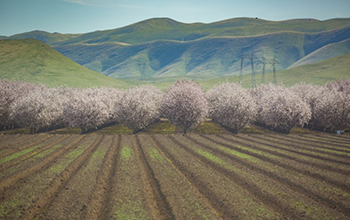 Almond groves, such as these in California's Central Valley, require consistent irrigation to live.

Nearly one-fifth of the world's population lives in regions where the next climate event could threaten access to an essential resource -- water -- according to a paper by University of California, Irvine researchers and others, published in Nature Sustainability.

The authors analyzed trends in global water usage from 1980 to 2016, with a focus on so-called inflexible consumption, such as irrigating perennial crops, cooling thermal power plants, storing water in reservoirs, and quenching the thirst of livestock and humans. Curtailing these uses would cause significant financial and societal hardship.

"Many studies evaluating water scarcity have centered on the share of the available supply being consumed by humans, but this ignores the fact that some uses are more flexible or productive than others," said lead author Yue Qin of UCI. The researchers discovered a significant increase in water stress for the worst-impacted regions over the 37-year study period.

Asia and, to a lesser degree, North America face a dilemma due to their high stress indices and large exposure: total human and livestock population, reservoir capacity, electricity generation and production of irrigated crops. These areas are particularly vulnerable to droughts or heat waves.

"This new index tells us where water issues are greatest and for what reasons, so decisions now don't limit our options and ability to be resilient in the future," said Thomas Torgersen, a program director in the National Science Foundation's Division of Earth Sciences, which funded the research.