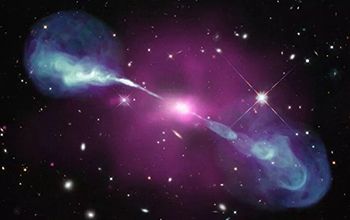 Jets of plasma at the center of a black hole. New science may deepen knowledge of large plasma jets.

Scientists for the first time have created a particular form of coherent and magnetized plasma jet that could deepen understanding of larger plasma jets that stream from newborn stars and possibly black holes.

"We are now creating stable, supersonic and strongly magnetized plasma jets in a laboratory that might allow us to study astrophysical objects light years away," said Princeton University astrophysicist Edison Liang, co-author of the paper reporting the results in The Astrophysical Journal Letters.

Princeton also discussed the finding in a recent press release.

The research team created the jets using the OMEGA Laser Facility at the University of Rochester. Researchers aimed 20 laser beams into a ring-shaped area on a plastic target. Each laser created a tiny puff of plasma; as the puffs expanded, they put pressure on the inner region of the ring. That pressure squeezed out a plasma jet reaching more than four millimeters in length and created a magnetic field that had the strength of more than 100 tesla.

A National Science Foundation program that aims to study particle energization and radiation in relativistic jets helped fund the discovery. "The work contributes to developing advanced simulation methods that will be useful across many disciplines," said Richard Barvainis, program director in NSF's Division of Astronomical Sciences.