In search of an undersea kelp forest's missing nitrogen 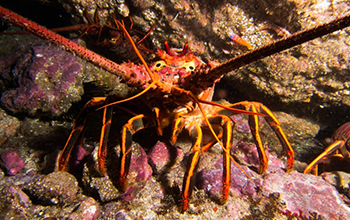 Lobsters and sea stars are important contributors to the kelp forest nitrogen cycle.

Plants need nutrients to grow. So scientists were surprised to learn that giant kelp maintains its impressive growth rates year-round, even in summer and early fall when ocean currents along the California coast stop delivering nutrients. Clearly something else is nourishing the kelp, but what?

A team of NSF-supported scientists at UC Santa Barbara has made a breakthrough in identifying one of those sources. Their research suggests that the invertebrate residents of kelp forests provide at least some of the nutrients the giant algae need. The findings appear in the journal Global Change Biology.

To sustain growth rates, kelp requires many nutrients, especially nitrogen, but changes in ocean currents reduce the availability of such nutrients each year beginning in May. As a result, kelp forests face a potential shortage of nitrogen just as long summer days are poised to fuel algal growth, said lead author Joey Peters.

Peters and his co-authors, UC Santa Barbara marine ecologists Dan Reed and Deron Burkepile, saw the local community of sea-bottom invertebrates as a likely additional nitrogen source. Indeed, it turned out that these invertebrates, especially lobsters and sea stars, are an important part of the nitrogen cycle in coastal ecosystems. Waste from the invertebrates is a consistent component of the "missing nitrogen."

The scientists made the discovery thanks to nearly two decades of data from the Santa Barbara Coastal Long-Term Ecological Research site, part of a network of sites funded by NSF to conduct long-term ecological research.

"This study reveals how environmental change can affect subtle ecosystem dynamics in kelp forests," said David Garrison, a program director in NSF's Division of Ocean Sciences, which funded the research. "This work would only be possible where long-term studies are underway."