Finding opens new ways to study our own planet and others 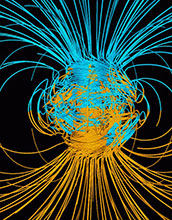 A model of patterns in Earth's inner core and outer magnetic field.

Vast rings of electrically charged particles encircle the Earth and other planets. Now, a team of scientists has conducted research into waves that travel through this magnetic, electrically charged environment, known as the magnetosphere, deepening understanding of the region.

The scientists, led by Eun-Hwa Kim, a physicist at the Princeton Plasma Physics Laboratory, examined a type of wave that travels through the magnetosphere. The waves, called electromagnetic ion cyclotron (EMIC) waves, reveal the temperature and density of plasma particles in the magnetosphere.

"Waves are a kind of signal from the plasma," said Kim, lead author of a paper that reported the findings in JGR Space Physics. "Therefore, the EMIC waves can be used as diagnostic tools to reveal some of the plasma's characteristics."

Kim and researchers at Andrews University in Michigan and Kyung Hee University in South Korea focused their research on mode conversion, the way in which some EMIC waves form. During this process, other waves that compress along the direction they travel from outer space collide with Earth's magnetosphere and trigger the formation of EMIC waves.

A better understanding of the magnetosphere could provide detailed information about how Earth and other planets interact with the space environment. EMIC waves could also allow scientists to determine the density of elements such as helium and oxygen in the magnetosphere.

"Kim and colleagues used computer models to explain how one type of wave can generate another type through the interaction of magnetic fields and particles," said Mike Wiltberger, a section head in NSF's Division of Atmospheric and Geospace Sciences, which funded the research. "Understanding the processes that convert these waves tells us how the charged particles in radiation belts are distributed, and how they can impact our satellites."