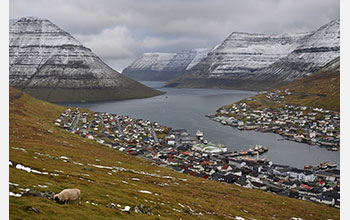 Research in the Faroe Islands examined the rate of chemical transfer from mother to fetus.

Environmental epidemiologists studying the presence of polyfluoroalkyl substance, PFAS, compounds in new mothers and their babies found that women with gestational diabetes had a significantly higher rate of transferring the synthetic chemicals to their fetuses.

The newly published study in Environmental International is among the largest to date in the number of substances examined. The chemicals are linked with increasing health concerns, including cancer risk, hormone interference, immune system suppression and developmental disruptions in infants and children.

Since the 1950s, PFAS compounds have been used worldwide in common household and industry goods, including nonstick cookware, water- and stain-resistant materials and food packaging. These forever chemicals, so-called because they do not break down in the environment, are also used in aqueous firefighting foams at military training sites and can infiltrate drinking water, which has become a major source of exposure in specific communities.

"The contamination is all over the world," says Youssef Oulhote, an epidemiologist at the University of Massachusetts Amherst, the study's corresponding author.

Blood and umbilical cord samples from 151 mother-newborn pairs in the Faroe Islands, located off the coast of northern Europe, were examined by Oulhote and public health colleagues at Sorbonne University in Paris, the University of Southern Denmark, the Faroese Hospital System and Harvard University, where Oulhote began his research into the health effects of chemicals.

The local population of the Faroe Islands is genetically and socioeconomically homogeneous, minimizing confounding factors in the research. "Most importantly, they consume whale, which is high in the food chain, so it accumulates many of the contaminants," Oulhote explains.

The research was funded by NSF’s Division of Ocean Sciences, through its Oceans and Human Health program in partnership with the National Institute of Environmental Health Sciences.