Clues found on how soils may respond to climate change 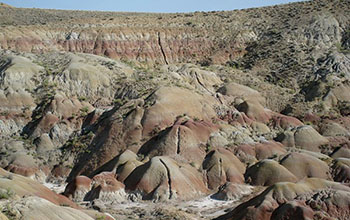 Rock core samples from a period of warming millions of years ago indicate that soils contributed to a rapid rise in atmospheric greenhouse gases and suggest that modern climate models may overestimate Earth's ability to mitigate future warming, according to an international team of scientists.

Researchers at Penn State and other institutions discovered a drastic drop in organic material preserved in sections of core samples from the Paleocene-Eocene Thermal Maximum, or PETM, a global warming event 55.5 million years ago that's considered the best analog for modern climate change.

The findings, according to the scientists, suggest that ancient soils from a site in modern-day Wyoming acted as a source of atmospheric carbon dioxide, emitting the greenhouse gas into the atmosphere, not a sink (trapping and storing carbon underground).

That could mean that global climate models may overstate the ability of terrestrial ecosystems to lessen the impacts of climate change. However, additional studies are needed to see how soils reacted to the PETM in other parts of the world, the researchers said.

The team reported their findings in the journal Paleoceanography and Paleoclimatology.

The cores, drilled in the Bighorn Basin in Wyoming, are the first terrestrial core samples of the PETM. The samples contained less organic matter than expected, but, at the time, the team lacked tools with enough sensitivity to measure specific biomarkers.

The researchers spent four years improving the sensitivity of their instruments and, using the new tools, collected the first biomarker record of the PETM from terrestrial core samples.

"This research on warm periods preserved in the rock record will help us learn about the effects of current warming on modern ecosystems," says Dena Smith, a program director in NSF's Division of Earth Sciences, which funded the study.