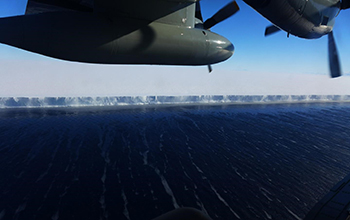 The edge of Antarctica's Ross Ice Shelf, more than 80 feet above the ocean surface.

A new paper by NSF-funded researchers at the Earth Institute at Columbia University offers fresh insights into the forces causing the world's largest ice shelf to melt.

The Ross Ice Shelf, a part of the Antarctic Ice Sheet that is floating on the ocean, measures several hundred meters thick and covers more than 480,000 square kilometers, approximately the size of Spain.

Its magnitude, and the fact that thinning of the ice shelf will speed up the flow of Antarctica's ice sheets into the ocean, means that increased melting of the shelf carries significant potential for sea level rise. Therefore, understanding the factors that influence annual shelf melt rates is critical for predicting climate impacts on sea level changes over the next few centuries.

A study published in the Journal of Geophysical Research: Oceans reveals that local and regional factors influence the Ross Ice Shelf's stability, and highlights connections between the Ross and Amundsen Seas, refining predictions of how climate may influence melt rates in the future.

The study comes out of the ROSETTA-Ice project, a three-year effort to collect geologic, oceanographic and glaciological data in the Ross Sea region funded by the NSF's Office of Polar Programs. Using sensor floats deployed by airplane into the Ross Sea, the team collected first-of-its-kind information about Antarctica's ice sheets, shelves and ocean currents.

The ROSETTA-Ice project has produced numerous findings about how the Ross Ice Shelf has changed over time. The results from this study highlight how local ocean currents and weather conditions can have significant impacts on a large mass of ice, indicating that models used to predict Antarctic ice loss in future climates need to consider both local and regional conditions.