Next solar cycle may start within a year 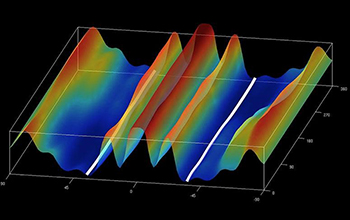 A solar "tsunami" travels toward the poles. Magnetic fields lifted to the surface erupt as sunspots.

In a pair of new papers, scientists paint a picture of how solar cycles suddenly die, potentially causing tsunamis of plasma to race through the sun's interior and trigger the birth of the next sunspot cycle only a few weeks later.

The new studies, led by researchers at the NSF-funded National Center for Atmospheric Research (NCAR), provide insights into the mysterious timing of sunspot cycles, which are marked by the waxing and waning of sunspot activity on the solar surface. While scientists have long known that these cycles last approximately 11 years, predicting when one cycle ends and the next begins has been challenging to pin down with any accuracy.

The new research could change that.

In one of the studies, which relies on nearly 140 years of solar observations from the ground and from space, the scientists were able to identify "terminator" events that clearly mark the end of a sunspot cycle. The authors predict that the current solar cycle, Solar Cycle 24, will end in the first half of 2020, kicking off Solar Cycle 25 shortly afterward.

In the second study, scientists explored the mechanism for how a terminator event could trigger the start of a new sunspot cycle. The simulations resulting from a sophisticated model the researchers used show that "solar tsunamis" could be the connection that explains the Sun's remarkably rapid transition from one cycle to the next.

The papers were published in the journals Solar Physics and Scientific Reports.

NSF's support for NCAR enables researchers to better understand the behavior of the atmosphere and related Earth and geospace systems. NCAR enhances the capabilities of the university community and the broader scientific community, fostering the transfer of knowledge and technology.