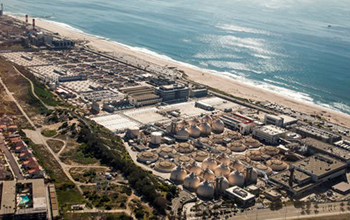 Salt is power. The energy in places where salty ocean water and freshwater mingle could provide a massive source of renewable power. Stanford University researchers have developed an affordable, durable battery that could harness this so-called blue energy.

"Blue energy is an immense and untapped source of renewable energy," said study co-author Kristian Dubrawski. "This battery is a major step toward capturing that energy without membranes, moving parts or energy input."

Dubrawski works in the lab of co-author Craig Criddle, who with other co-authors is part of the NSF-funded Engineering Research Center for Re-inventing the Nation's Urban Water Infrastructure.

The technology could work wherever fresh and saltwater mix, but coastal wastewater treatment plants offer particular potential since they are located near saltwater environments.

Wastewater treatment is energy-intensive, accounting for about 3% of the total U.S. electrical load. The process is vulnerable to power grid shutdowns. Making wastewater treatment plants energy independent would not only cut electricity use and emissions but also make them immune to blackouts -- a major advantage in places such as California, where recent wildfires have led to large-scale outages.

The research is partially funded by NSF's Division of Engineering Education and Centers, through its center for Re-Inventing the Nation's Urban Water Infrastructure.

"Fundamental research at the Center will help us manage urban water more safely and sustainably in the future," said Sandra Cruz-Pol, an NSF program director for Engineering Research Centers. "This is especially important in water-stressed regions to deal with the challenges of demographics, water scarcity, and climate change. One strength of NSF research centers is their ability to move their discoveries into practice through realistic testbeds and partnerships with industry and government."