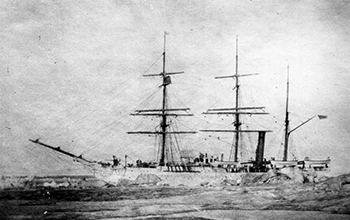 Our knowledge of dwindling sea ice coverage in the Arctic Ocean comes mostly through satellites, which have imaged sea ice from above since 1979. The University of Washington Pan-Arctic Ice Ocean and Modeling System (PIOMAS) is a leading tool for gauging the thickness of that ice. Until now the system has gone back only as far as 1979.

A new paper extends the estimate of Arctic sea ice volume back more than a century, to 1901. To do so, the scientists used both modern-day computer simulations and historic observations, some written by hand in the early 1900s aboard precursors to today's U.S. Coast Guard ships.

The research "allows us to put more recent variability and ice loss in perspective," said Axel Schweiger, a sea ice scientist at the university's Applied Physics Laboratory and first author of a study published in the Journal of Climate.

"The volume of sea ice in the Arctic Ocean today and the current rate of loss are unprecedented in the 110-year record," Schweiger said.

During the early 20th century, rare direct observations of sea ice were done by U.S. Revenue cutters, the precursors to Coast Guard ships, and by Navy ships that have cruised through the Arctic each year since 1879.

In what's known as the Old Weather project, university researchers and their collaborators have been working with citizen scientists to transcribe weather entries in digitized historic U.S. ships' logbooks to recover unique climate records. The new study is the first to use the logbooks' observations of sea ice.

"This is an exciting use of historical records to expand what we know about the past Arctic environment," said Cynthia Suchman, a program director in NSF's Office of Polar Programs, which funded the research.