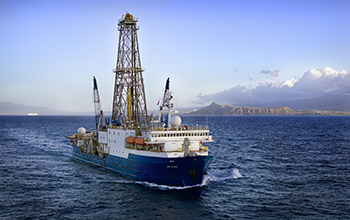 The NSF-funded deep-sea drilling research vessel JOIDES Resolution off the coast of Hawaii.

A day is the time for Earth to make one complete rotation on its axis, and a year is one revolution around the Sun -- reminders that basic units of time and periods on Earth are intimately linked to our planet's motion in space.

The same goes for climate cycles. Cycles in daily and annual sunlight cause the familiar swings in temperatures and seasons. On geologic time scales (thousands to millions of years), variations in Earth's orbit are the pacemakers of the ice ages. Changes in these parameters can be identified in rock or sediment archives, like fingerprints left behind.

A "calendar" of the past has revolutionized the dating of geologic archives, identifying ages of geologic periods based on astronomy. This astronomical answer has a built-in clock (computing planetary orbits backward in time), providing an accurate chronology for the geologic record.

However, geologists and astronomers have struggled to extend the astronomical time scale farther back than 50 million years because of solar system chaos, which has made the time scale unpredictable beyond a certain point.

In a new study published in Science, Richard Zeebe of the University of Hawai'i at Manoa and colleagues offer a way to overcome the roadblock. The team used geologic records from deep-sea drilling cores recovered using the NSF-funded research drillship JOIDES Resolution to extend the astronomical time scale by about eight million years. Further application of the new method promises to reach farther back, one step and geologic record at a time.

"The ability to precisely define time scales is a fundamental challenge in geology, and these results are a big step forward in allowing scientists to understand the climate system over very long time scales," says Candace Major, a section head in NSF's Division of Ocean Sciences, which funded the research.