Results are one step closer to development of autonomous biobots 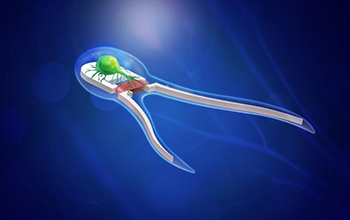 Artist's rendering of a new generation of biobots.

Teams led by Taher Saif and Rashid Bashir at the University of Illinois worked together to develop the first self-propelled biohybrid swimming and walking biobots powered by beating cardiac muscle cells derived from rats.

"Our first study successfully demonstrated that the bots, modeled after sperm cells, could in fact swim," Saif said. "That generation of singled-tailed bots used cardiac tissue that beats on its own, but they could not sense the environment nor make any decisions."

In a study published in the Proceedings of the National Academy of Sciences and led by Saif, the researchers reveal a new generation of two-tailed bots powered by skeletal muscle tissue stimulated by on-board motor neurons. The neurons have optogenetic properties. Upon exposure to light, the neurons fire to activate the muscles.

After confirming that the neuromuscular tissue was compatible with their synthetic biobot skeletons, the teams worked to optimize the swimmers' abilities.

Saif said that the teams envision the advance leading to the development of multicellular engineered living systems with the ability to respond intelligently to environmental cues. Applications will be in bioengineering, medicine and self-healing materials technologies, the scientists said.

However, they acknowledge that -- like living organisms -- no two biohybrid machines will be the same. "Two machines designed to perform the same function will not be the same," Saif said. "One may move faster or heal from damage differently than the other -- a unique attribute of living machines."

The research was funded by NSF's Directorate for Computer and Information Science and Engineering.