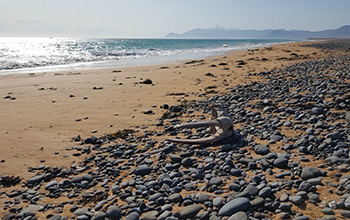 Scientists used ancient DNA analyses and carbon-14 dating to demonstrate the past existence of a unique population of Icelandic walrus that went extinct shortly after Norse settlement some 1,100 years ago. Walrus-hunting and the ivory trade were likely the cause of the extinction, one of the earliest examples of commercially driven overexploitation of marine resources.

The presence of walruses in Iceland in the past and their apparent disappearance as early as the Settlement and Commonwealth periods (A.D. 870–1262) have long puzzled biologists. In a study published in the journal Molecular Biology and Evolution, researchers analyzed ancient and contemporary DNA along with carbon-14 dating of walrus remains, supplemented with detailed studies of the remains' locations, place names and references to walrus-hunting in Icelandic Medieval literature, including the Icelandic Sagas.

DNA was extracted from walrus sites and archaeological excavations of walrus samples and compared with data from contemporary walruses, documenting that the Icelandic walrus constituted a genetically unique lineage, distinct from all other historic and contemporary walrus populations in the North Atlantic.

Walrus ivory was once a luxury in high demand and was widely traded in the Viking Age and across Medieval Europe. Beautifully ornamented tusks were documented as far away as the Middle East and India.

Most examples of trade, human overexploitation, and extinction of local marine resources from overfishing and commercial whaling are from more recent dates.

"The findings from this study highlight the value of using museum collections and molecular techniques to help understand historical patterns of human behavior," said Roberto Delgado, a program director in NSF's Office of Polar Programs, which funded the research. "The results will help us understand human impacts on local biodiversity, marine wildlife management practices, and the sustainable harvesting of natural resources in contemporary coastal communities."