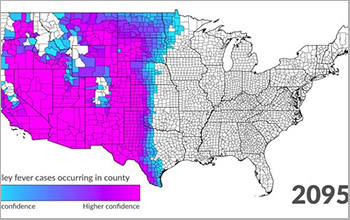 By 2095, Valley fever is projected to travel farther north throughout the western U.S.

Valley fever is endemic to hot, dry regions such as California's San Joaquin Valley in the southwestern United States, but scientists at the University of California, Irvine predict that climate change will cause the fungal infection's range to more than double this century, reaching previously unaffected areas across the western U.S.

In a study published online in the American Geophysical Union journal GeoHealth, the researchers argue that a high-warming scenario will increase affected states from 12 to 17, and the number of individual Valley fever cases 50 percent, by the year 2100.

The scientists' model predicts that Valley fever will travel farther north throughout the western United States, especially in the rain shadow of the Rocky Mountains and in the Great Plains.

The researchers studied climate conditions where Valley fever is most common. They concluded that counties with more than 10 cases per 100,000 people had average annual temperatures above 50 degrees Fahrenheit and average rainfall below 23.6 inches per year.

Both temperature and precipitation are expected to change considerably in the western U.S. in future decades but increasing temperatures in already dry states will allow the disease to spread, the scientists found.

"This study projects the northward spread of the fungus that causes valley fever due to climate change," says Matt Kane, a program director in NSF's Division of Environmental Biology. "This is one example of the importance of NSF's investment in the newly completed National Ecological Observatory Network, designed to measure the impacts of environmental change on ecology, biodiversity and infectious diseases."

Adds Jonathan Wynn, a program director in NSF's Division of Earth Sciences, which co-funded the research, "This research is a nice example of how Earth system science extends beyond the analysis of the natural Earth system and informs broader disciplines, including public health and policy."