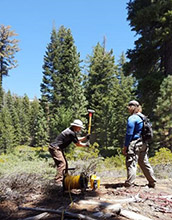 Weathering of subsurface rock is due to rocks expanding.

A University of Wyoming researcher and his team have discovered that weathering of subsurface rock in the southern Sierra Nevada Mountains of California is due more to rocks expanding than to chemical decomposition, as previously thought.

Porosity, the void space in rock, was conventionally thought to be produced when water flows through rock, resulting in minerals that chemically dissolve. Because mountain watersheds provide large reservoirs of water, the new findings are relevant to water resource management throughout the U.S.

"It's important to understand what is going on in the subsurface layer," says geoscientist Cliff Riebe. "It has enormous capacity to store water. What we don't know is 'How does the storage space get produced?' Understanding this layer between the soil and rock is important."

Saprolite, which Riebe refers to as "rotten rock," is the zone of weathered rock that retains the relative positions of mineral grains of the parent bedrock and lies between the layer of soil and harder rock underneath. In mountain landscapes, saprolite may be the only thing keeping forests alive during times of drought.

Riebe is corresponding author of a paper published in Science Advances.

What scientists have commonly assumed, Riebe says, is that expansion of rocks is not very important. Riebe and his team discovered, however, that expansion in rocks dominates the weathering process in the southern Sierra Nevada region.

"This study combines geophysical and geochemical data to infer how porous space is created in the subsurface," said Lina Patino, director of NSF's Division of Earth Sciences, which funded the research. "The combination of techniques has allowed the investigators to gain insights into processes that have a wide range of implications, for example, determining the subsurface water storage capacity in a region."