Rocks tell story of asteroid that doomed the dinosaurs 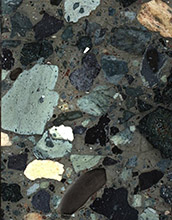 Drilled cores from rocks in the crater left by the asteroid impact.

When the asteroid that wiped out the dinosaurs slammed into the planet, the impact set wildfires, triggered tsunamis and blasted so much sulfur into the atmosphere that it blocked the sun, which caused the global cooling that ultimately doomed the dinos.

That's the scenario scientists have hypothesized. Now, a new study led by researchers at The University of Texas at Austin has confirmed it by finding hard evidence in the hundreds of feet of rocks that filled the impact crater within the first 24 hours after impact.

The evidence includes bits of charcoal, jumbles of rock brought in by a tsunami's backflow, and conspicuously absent sulfur. They are all part of a rock record that offers the most detailed look yet into the aftermath of the catastrophe that ended the Age of Dinosaurs, said Sean Gulick, a geoscientist at the University of Texas Institute for Geophysics.

"It's an expanded record of events that we were able to recover from within 'ground zero,'" said Gulick, who led the study and co-led the International Ocean Discovery Program scientific drilling mission that retrieved the rocks from the impact site off the Yucatan Peninsula. "It tells us about impact processes from an eyewitness location."

The research was published in Proceedings of the National Academy of Sciences and builds on earlier work that described how the crater formed and how life quickly recovered at the site.

"The rock sequences recovered by this scientific drilling expedition record an unprecedented level of detail about one of the most catastrophic events in Earth's history," said Candace Major, a section head in NSF's Division of Ocean Sciences, which funded the research.