Insights into important roles of plankton in carbon dioxide storage 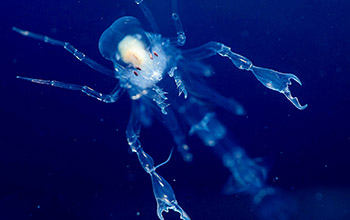 Microscopic zooplankton play important roles in transport and sequestration of carbon in the ocean.

The sea is Earth's most formidable carbon dioxide storage machine, but mysteries abound about the interlocking processes and the myriad organisms involved.

Now, thanks to NSF-funded research published in a series of papers in the journal Frontiers in Marine Science, researchers at Florida State University are inching toward understanding the ocean's carbon storage, its constituent biological players and the factors that could be limiting its efficiency.

In three studies of the biological carbon pump — the process by which carbon dioxide is produced by photosynthetic algae in the surface ocean and transferred to the seafloor and stored for millennia -- biological oceanographer Mike Stukel and his collaborators found that microscopic zooplankton play critical, often underappreciated roles in transporting and holding carbon.

"These organisms contribute to the biological carbon pump by creating carbon-rich fecal pellets that sink rapidly into the ocean," Stukel said. "However, some zooplankton also feed on those sinking particles, thus decreasing the efficiency of that pump."

Most studies of zooplankton's role have assumed that behavior of particular zooplankton groups is representative of all zooplankton in the sea. This research demonstrates the variety of ways these diminutive organisms can alter, and sometimes impede, the biological carbon pump.

Stukel and his team found that some groups of particle-feeding organisms may influence carbon transport as much as more abundant suspension-feeders like krill, which dine on floating organic matter closer to the ocean's surface.

"These articles are a major advancement in our understanding of microscopic zooplankton," says Dan Thornhill of NSF's Division of Ocean Sciences, which funded the research through its California Current Ecosystem Long-Term Ecological Research site. "These organisms, nearly invisible to our eyes, shape and define major ocean processes."