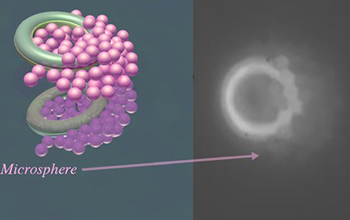 The researchers can manipulate the doughnuts with magnetic fields, as seen in image on right.

Bacteria and other swimming microorganisms evolved to thrive in challenging environments. But it's difficult to harness these microorganisms' abilities for biomedical purposes, so NSF-funded researchers are now manufacturing artificial microswimmers called tori that would fit the bill.

The microscopic, 3D-printed, doughnut-shaped tori are coated with nickel and platinum and bridge the gap between biological and synthetic swimmers.

The micro-swimmers mimic biological behavior and might one day deliver targeted drugs or stir samples in a lab-on-a-chip -- a laboratory in miniature. "These doughnuts may eventually have medical applications as active materials," said Igor Aronson of Penn State. Active materials are those that move on their own.

"It's really hard to get things to mix when using a lab-on-a-chip," said Remmi Danae Baker of Penn State. "These microtori, because they are active materials, could be used to aid in micromixing. We created two different designs, horizontal and vertical. Horizontal tori are printed flat on a supporting glass slide, then glazed with nickel and platinum. Vertical tori are 3D-printed upright and are dipped in nickel and platinum."

The nickel serves two purposes. Platinum will not stick to the plastic micro-doughnuts, but nickel will, and platinum will stick to nickel. Also, nickel is magnetic, so the researchers can manipulate the doughnuts with magnetic fields.

The researchers want the doughnuts to behave like living organisms -- to swim in water and respond to signals. Living things need food or fuel for motion. For their experiments, the scientists placed the microtori in a hydrogen peroxide solution, which was the fuel. Platinum decomposes hydrogen peroxide and powers propulsion of the donuts. The results were published in the journal Nature Communications.