Unless warming is slowed, emperor penguins will march toward extinction

Emperor penguin population expected to decline by the year 2100 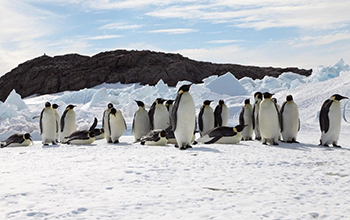 The fate of emperor penguins is largely tied to sea ice, leaving them vulnerable to climate warming.

Emperor penguins are some of the most striking and charismatic animals on Earth, but an NSF-funded study by scientists at the Woods Hole Oceanographic Institution has found that a warming climate may render the penguins extinct by the end of this century.

The results are published in the journal Global Change Biology.

"If global climate keeps warming at the current rate, we expect emperor penguins in Antarctica to experience an 86% decline by the year 2100," says Stephanie Jenouvrier, a seabird ecologist at WHOI and lead author of the paper. "At that point, it is very unlikely for them to bounce back."

The fate of the penguins is largely tied to the fate of sea ice, which the animals use as a home base for breeding, feeding and molting. Emperor penguins tend to build their colonies on ice with extremely specific conditions -- it must be locked into the shoreline of the Antarctic continent, but close enough to open seawater to give the birds access to food for themselves and their young.

As climate warms, however, that sea ice will gradually disappear, robbing the birds of their habitat, food sources, and ability to raise their chicks.

"We've been developing the penguin model for 10 years," says Jenouvrier. "It can give a very detailed account of how sea ice affects the life cycle of emperor penguins, their reproduction, and their mortality."

Said Jennifer Burns, a program director in NSF's Office of Polar Programs, "This study highlights the value of multidisciplinary research that integrates field studies with remote sensing and modeling to understand how long-lived ice-associated species such as the emperor penguin are vulnerable to changing climate conditions."