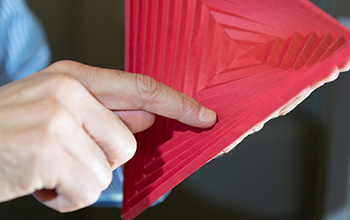 The hypar origami form, with its sweeping opposing arcs and saddle shape, has long been popular with artists working in the paper-folding tradition. Now NSF-funded researchers at Georgia Tech and their collaborators are investigating the shape with an eye toward leveraging its structural properties, hoping to find ways to harness its bistability to build multifunctional devices or metamaterials.

Bistability refers to the origami pattern's ability to find a resting equilibrium in two different states.

Research reported in Nature Communications examined whether the popular origami pattern that resembles the geometric hyperbolic paraboloid -- or hypar -- had the same physical characteristics as its geometric counterpart. The scientists also tried to understand how its folds contribute to the formation of the pattern.

"The hyperbolic paraboloid is a striking pattern that has been used in architectural designs the world over," said Glaucio Paulino of Georgia Tech. The origami pattern "has structural bistability that could be harnessed for metamaterials used in energy trapping or other microelectronic devices."

To understand more about the mechanisms that create the saddle shapes, the researchers created a theoretical model that could predict the behavior of the origami.

"Remarkably, these engineering researchers developed this first mathematical proof, which shows that the elegant shape folded from concentrically pleated squares is invariantly a hyperbolic paraboloid," said Nakhiah Goulbourne, NSF program director for Mechanics of Materials and Structures. "This is apparently the first complete proof in the literature and quite the accomplishment to cross domains from engineering to mathematics with such depth."

The key, Goulbourne said, is that "the model connects geometry to mechanics in an intricate way, paving the way for a new branch of mechanics. These discoveries will provide a new paradigm for using reconfigurable and programmable metasurfaces in many fields, from space exploration and robotics to medicine and microelectronics."