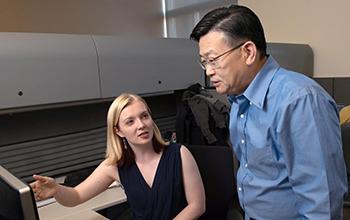 For someone with Alzheimer's disease, there's no turning back the clock. By the time memory loss and other worrisome signs appear, cognitive decline has already begun.

Now, NSF-funded researchers at Gladstone Institutes are approaching this devastating disease from a different angle. A new study published in Cell Reports demonstrates that patterns of brain activity can predict in advance whether a young mouse will develop Alzheimer's-like memory deficits in old age.

"Being able to predict deficits long before they appear could open up new opportunities to design and test interventions that prevent Alzheimer's in people," said Yadong Huang, senior author of the study.

The new work builds on a study of mice engineered to carry a gene associated with an increased risk -- but not a guarantee -- of Alzheimer's disease in humans.

In a previous study, Huang and his team investigated a type of brain activity called sharp-wave ripples, which play a direct role in spatial learning and memory formation in mammals. These ripples occur when the brain of a resting mouse or human rapidly and repeatedly replays a recent memory of moving through a space, such as a maze or a house.

The analysis revealed that deficits in sharp-wave ripple abundance and short gamma power at an early age predicted which mice would perform worse on memory tasks 10 months later -- equivalent to 30 years for a human.