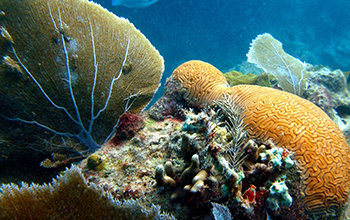 For colorful, graceful sea fans swaying on coral reefs in the waters around Puerto Rico, copper is an emerging threat in an era of warming oceans.

"We know warming oceans pose a threat to coral reefs around the world," said Allison Tracy, who conducted the work with marine scientist Drew Harvell. "Action to alleviate the impact of warming oceans is a priority and understanding the role of pollutants in coral disease and mortality gives us more options for solutions."

While plastics and microplastics are well-known threats to the world's oceans, the effect of metal contamination is poorly understood, according to the researchers. Increased copper in the water can be a result of agricultural runoff or marine paint leaching from boat hulls.

The research supplied new data on the role of environmental stressors in coral disease and may provide a toolkit for combating disease in corals.

"We can't manage climate damage to coral reefs until we better understand how pollution and disease magnify the impacts of heat stress," Harvell said.

Added Dan Thornhill, a program director in NSF's Division of Ocean Sciences, "This study helps us understand the complex interactions of stressors that lead to disease in corals, including heavy metal pollution, fungal pathogens, and warming seas."