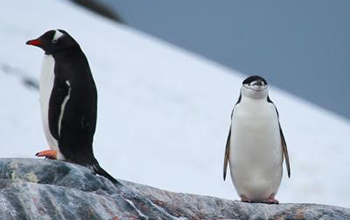 A gentoo (left) and a chinstrap penguin standing on rocks along the Antarctic Peninsula.

New NSF-funded research reveals how two penguin species, the gentoo and the chinstrap, have dealt with more than a century of human impacts in Antarctica, and why some species are winners and others are losers in this rapidly changing ecosystem.

Michael Polito of Louisiana State University and co-authors published their findings in the journal Proceedings of the National Academy of Sciences.

Polito co-led a team of researchers working to understand how human hunting of seals and whales over the last century, and fishing in modern times, has affected penguin populations. Seals, whales and penguins all feast on shrimplike crustaceans called Antarctic krill.

As the availability of krill has decreased, gentoo penguins have diversified their diets to include fish and squid along with krill. In contrast, chinstrap penguins have remained krill specialists. The findings support the idea that dietary specialists are more vulnerable to changes in resource availability and environmental change than are more resilient generalists.

"This research highlights the value of long-term studies for understanding the impact of environmental change on long-lived marine predators such as penguins," said Jennifer Burns, a program director in NSF's Office of Polar Programs. "That changes in the availability of a preferred food item such as krill can differentially impact otherwise similar species emphasizes our need to better understand the role of behavioral flexibility in Antarctic and other ecosystems."