Justinianic plague not a landmark pandemic?

Research leads to clearer picture of the plague’s effects 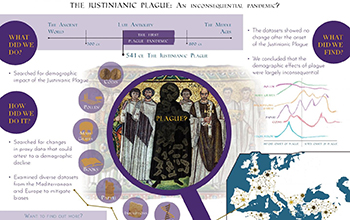 A graphic showing highlights of new research results on the Justinianic plague.

Thanks to results of a recent study, researchers now have a clearer picture of the impact of the Justinianic Plague, which lasted from about 541-750 CE.

Led by NSF-funded researchers at the University of Maryland's National-Socio Environmental Synthesis Center, the team found that the plague's effects, sometimes attributed to the fall of the Roman Empire, may have been exaggerated. Their paper appears in Proceedings of the National Academy of Sciences.

"Our article is the first time such a large body of interdisciplinary evidence has been investigated in this context," said lead author Lee Mordechai of the synthesis center and the Hebrew University of Jerusalem. "If this plague was a key moment in human history that killed between a third and half the population of the Mediterranean world in just a few years, as is often claimed, we should have evidence for it, but our survey of datasets found none."

"Our paper rewrites the history of Late Antiquity from an environmental perspective that doesn't assume plague was responsible for changing the world," said Merle Eisenberg, also of the synthesis center. "It's notable because historians led this effort and asked historical questions that focused on the potential social and economic effects of plague."

The team found that previous researchers depended on the most evocative written accounts, applying them to other places in the Mediterranean world while ignoring hundreds of contemporary texts that do not mention plague.

"This study highlights the need to approach historic reconstructions from a multi-disciplinary perspective that brings many lines of evidence to bear in assessing complex events," said Liz Blood, a program director in NSF's Division of Environmental Biology. "By combining biological, ecological, historical and sociological analyses, new constraints on the impact of this plague were identified."