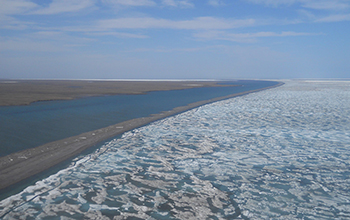 The changing flows may be influencing food web structure in lagoons on the Beaufort Sea coast. These lagoons support more than 150 species of migratory birds and waterfowl. "Local indigenous communities rely on fish and other resources in the lagoon ecosystems for their subsistence lifestyles," says Michael Rawlins, a geoscientist at the University of Massachusetts Amherst.

The research is supported by a grant from the National Science Foundation's Long-Term Ecological Research program to study Alaska's Beaufort Lagoon Ecosystems.

Rawlins says that warming temperatures are expected to shift the Arctic from a system dominated by surface water to a groundwater-dominated system, with deeper water flow paths through newly thawed soils.

Because field measurements of river discharge and other hydrologic cycle parameters in the Beaufort lagoons region are sparse, a modeling approach is necessary to quantify land-to-ocean flows and their changing character. Details of the investigation into Arctic watersheds are published in the journal The Cryosphere.

"The rapid changes in permafrost and their impacts on local biodiversity, nutrient cycling, and food webs will have an impact on Arctic coastal communities, subsistence lifestyles, and food security," says Roberto Delgado, a program director in NSF's Office of Polar Programs.