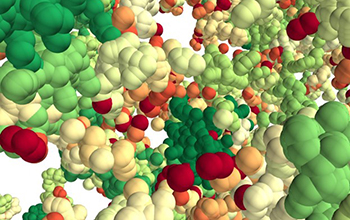 A 3D forest of chromatin. Tree domains are colored from red to green according to their sizes.

A single cell contains the genetic instructions for an entire organism. This genomic information is managed and processed by the complex machinery of chromatin -- a mix of DNA and protein in chromosomes whose function and role in disease are of increasing interest to scientists and engineers.

Using mathematical modeling and optical imaging, researchers funded by NSF and affiliated with Northwestern University studied how chromatin folds at the single-cell level. The scientists found that chromatin is folded into a variety of tree-like domains spaced along a chromatin backbone. These small and large areas are like a mixed forest of trees growing from the forest floor. The overall structure is a 3D forest at the microscale.

Chromatin is responsible for packing DNA into the cell nucleus. In humans, that's about six feet of DNA in each cell. The new work suggests that chromatin is more structured and hierarchical in single cells than previously thought. Learning how chromatin correctly operates will help researchers understand what goes wrong in cancer and other diseases.

"These researchers have successfully delved into the connectivity between physical interactions and genetic encoding within a cell," said Leon Esterowitz, a program director in NSF's Emerging Frontiers & Multidisciplinary Activities Division. Added Nora Savage, a program director in NSF's Chemical, Bioengineering, Environmental and Transport Systems Division, "As we better understand and learn to harness such rules of life, we gain many new opportunities in medicine, agriculture, manufacturing and other areas."

Biomedical engineer Igal Szleifer, who co-led the research team with scientist Vadim Backman, said, "By integrating theoretical and experimental work, we have produced a new chromatin folding picture that helps us see how the 3D genome is organized at the single-cell level."

Results of the study were published in the journal Science Advances.

"If genes are the hardware, chromatin is the software," said Backman. "If the structure of chromatin changes, it can alter the processing of the information stored in the genome, but it does not alter the genes themselves. Understanding chromatin folding holds the key to understanding how cells differentiate and how cancer happens."