Signs of fires, hurricanes, other disruptions linger for years 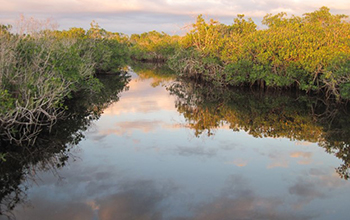 The chemical signature left behind by hurricanes, fires, cold snaps and droughts can linger in the slow-moving water of the Florida Everglades for up to a decade, researchers report.

No one expected evidence of these disturbances to be detectable in the water for so long and to spread across different areas of the Everglades, the scientists say. Increased levels of phosphorus, nitrogen, bacterial production and dissolved carbon were found in water data collected from 2000 to 2017 at the Florida Coastal Everglades Long-Term Ecological Research site supported by the National Science Foundation. The discovery could influence water management of the Everglades.

"That we can use long-term data to sense that a disturbance happened means it must be having an important role in the system," says Florida International University ecologist John Kominoski, the study's lead author. "Otherwise, it would be overwhelmed by 'noise' instead of these clear signals."

Hurricane Wilma in 2005. Fire in 2008. A cold snap and a drought in 2010. Another cold snap in 2011. A drought and excessive flooding in 2015. Hurricane Irma in 2017. Each of these disturbances left unmistakable, traceable signals in the chemistry of the water winding through the Everglades.

Researchers were equally surprised to see these chemical signatures in different parts of the Everglades -- from freshwater marshes to coastal mangroves -- because they expected that local environmental conditions would predominate. Sea level rise and the introduction of more freshwater from restoration means that more water is moving in and interconnecting through the Everglades system, spreading these chemical markers farther from their points of origin.

"It tells us the Everglades is a highly sensitive and connected ecosystem," Kominoski says. "It has memory of disturbance events that we can detect years later in the chemistry of the water."

The study is published in the journal Ecology.