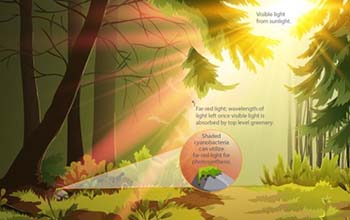 When cyanobacteria live in low-light conditions, some can switch to using far-red sunlight.

Scientists have determined the structure of the protein complex that gives cyanobacteria their unique ability to convert weak, filtered sunlight into useable energy. The National Science Foundation-funded results could be used to engineer crops that thrive under low-light conditions. The findings appear in the journal Science Advances.

Cyanobacteria are tiny photosynthetic organisms that live virtually everywhere on Earth. They helped create an oxygen-rich atmosphere and continue to provide us with much of the oxygen we need to survive.

"When cyanobacteria live in low-light conditions, such as beneath a pond surface or under the leaf litter on a forest floor, some are able to switch from using the visible light that’s most conducive to their growth to harvesting weaker, far-red sunlight," said Donald Bryant, a biologist at Penn State. "That ability gives cyanobacteria an advantage over other organisms, and is part of why they’re responsible for 50% of all photosynthetic activity on the planet."

The team, which included researchers at Arizona State University, investigated Fischerella thermalis, a cyanobacterium previously used as a model organism for the study of photosynthesis.

Like all species of cyanobacteria, F. thermalis is rich in chlorophyll, the pigment responsible for absorbing light. Recent research suggests that F. thermalis's usual complement of chlorophyll, called chlorophyll a, is partially replaced under far-red light conditions with a closely related, yet chemically distinct, form of the molecule, known as chlorophyll f.

Bryant and his colleagues used cryogenic electron microscopy, Cryo-EM, to solve the structure of the F. thermalis photosystem I, one of two protein complexes responsible for photosynthesis found in all photosynthetic organisms.

"Small organisms such as cyanobacteria often learn to survive in extreme conditions by modifications of their biological molecules," says Engin Serpersu, a program director in NSF's Division of Molecular and Cellular Biosciences.