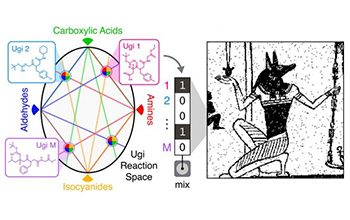 By encoding data in molecules, scientists can store terabytes of data in a few millimeters of space.

A team of National Science Foundation-funded researchers has made substantial progress in creating a new type of data storage system.

As the data universe continues to expand, much work is being done to find new and more compact means of storage. By encoding data in molecules, it may be possible to store the equivalent of terabytes of data in just a few millimeters of space.

In a study published in Nature Communications, the scientists describe how they stored a variety of image files -- a Picasso drawing, an image of the Egyptian god Anubis and others -- in arrays of mixtures containing custom-synthesized small molecules.

In all, the researchers stored more than 200 kilobytes of data, which they say is the most data stored to date using small molecules. That's not a lot of data compared to traditional means of storage, but it is significant progress in terms of small molecule storage, the scientists say.

"I think this is a substantial step forward," said Jacob Rosenstein of Brown University and an author of the study. "The large numbers of unique small molecules, the amount of data we can store, and the reliability of the data readout show real promise for scaling this up even farther."

Most research on molecular storage has focused on long-chain polymers such as DNA, which are well known carriers of biological data. But there are potential advantages to using small molecules as opposed to long polymers. Small molecules are potentially easier and cheaper to produce than synthetic DNA, and in theory have an even higher storage capacity.