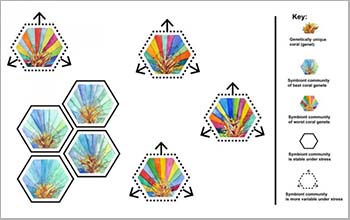 Researchers examined the relationship between dinoflagellate diversity and coral tolerance

Researchers have found a potential tool for identifying "super corals" that can tolerate a limited amount of climate change.

"We may be able to use algae team characteristics to identify coral colonies to focus on for conservation or restoration," said reef researcher Adrienne Correa, a Rice University marine biologist and co-author of a newly published study in the journal Global Change Biology.

In the study, the National Science Foundation-funded researchers gathered corals from the Great Barrier Reef and used separately controlled tanks to compare how well they responded to rising ocean temperatures, increased acidity and exposure to bacterial infections.

A look at the symbiotic algae, or zooxanthellae, inside the corals revealed an interesting dynamic: Corals with more similar groups of algae survived better under stress.

"What's unique about this project is that we looked at the whole community of symbiotic algae in relation to coral stress tolerance in these colonies," said study lead co-author Lauren Howe-Kerr of Rice University.

Added Correa, "It's like looking at all the players on a sports team together as you try to predict how their next season might go. Individual talent is important, but so is the team that talent works with."

In exchange for a protected life inside corals, zooxanthellae help feed their hosts by converting sunlight into food. They also impart the vibrant colors in reefs. A single coral colony can be home to multiple species of these dinoflagellates. And while they may look identical under a microscope, the differences between groups are detectable by DNA analysis.

In the published study, Howe-Kerr, Correa and co-authors showed how this symbiont community diversity might be used to predict coral stress response.