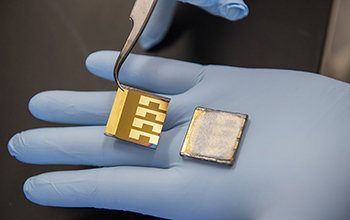 The solar cell sample on the right has a protective lead-absorbing film applied to the backside.

A team of National Science Foundation-supported researchers at Northern Illinois University and the U.S. Department of Energy's National Renewable Energy Laboratory in Golden, Colorado, report in the journal Nature on a potential breakthrough in the development of hybrid perovskite solar cells.

Led by Tao Xu of NIU and Kai Zhu of NREL, the team has developed a technique to sequester the lead in perovskite solar cells, minimizing potential toxic leakage. A transparent lead-absorbing film is applied to a conducting glass on the front of the solar cell. The sequestration film contains strong, lead-binding phosphonic acid groups but does not hinder cell capture of light. The metal electrode on the back, which has no need for transparency, uses a less-expensive polymer film blended with lead-chelating agents.

"In the event of a damaged cell, our device captures the great majority of the lead, preventing it from leaching into groundwater and soils," said Xu, an NIU professor of chemistry. "The films that we use are insoluble in water."

In the lab, under conditions of severe solar cell damage, the lead-absorbing films sequestered 96% of lead leakage, the scientists said. Their experiments further indicate the lead-absorbing layers do not negatively impact cell performance or long-term operation stability. NSF Division of Materials Research program manager James Edgar said, "This creative approach to making perovskite solar cells more practical is based on the kind of fundamental research that NSF strongly supports."