How Newborn Stars Prepare for the Birth of Planets 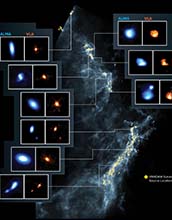 Image of the Orion Molecular Clouds, identifying observations by ALMA (blue) and the VLA (orange).

An international team of astronomers used two of the most powerful radio telescopes in the world to create more than three hundred images of planet-forming disks around very young stars in the Orion Clouds. These images reveal new details about the birthplaces of planets and the earliest stages of star formation.

Astronomers want to know exactly when disks start to form and what they look like. But young stars are very faint, and there are dense clouds of dust and gas surrounding them in stellar nurseries. Only highly sensitive radio telescope arrays can spot the tiny disks around these infant stars amid the densely packed material in these clouds.

For this new research, astronomers pointed both the National Science Foundation's Karl G. Jansky Very Large Array and Atacama Large Millimeter/submillimeter Array to a region in space where many stars are born: the Orion Molecular Clouds. This survey, called VLA/ALMA Nascent Disk and Multiplicity, is the largest survey of young stars and their disks to date.

Many aspects about the first stages of star formation, and how the disk forms, are still unclear. But this new survey provides some missing clues as the VLA and ALMA peered through the dense clouds and observed hundreds of protostars and their disks in various stages of their formation.

The exquisite resolution and sensitivity provided by both ALMA and the VLA were crucial to understand both the outer and inner regions of protostars and their disks. While ALMA can examine the dense dusty material around protostars in great detail, the images from the VLA made at longer wavelengths were essential to understand the inner structures of the youngest protostars at scales smaller than our solar system.

"The combined use of ALMA and the VLA has given us the best of both worlds," said John Tobin of the National Radio Astronomy Observatory. "Thanks to these telescopes, we start to understand how planet formation begins."

The research was presented in two papers in The Astrophysical Journal.