A tactile robot finger with no blind spots 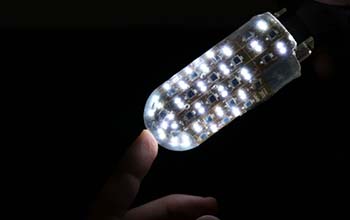 The optical tactile finger, shown here without skin to illustrate its operation.

Researchers at Columbia Engineering have introduced a new type of robotic finger with a sense of touch. It can localize touch with very high precision over a large, multi-curved surface, much like a human finger.

Current methods for building touch sensors have proven difficult to integrate into robot fingers due to multiple challenges, including difficulty in covering multi-curved surfaces, high wire count, and difficulty fitting into small fingertips, thus preventing use in dexterous hands. The Columbia Engineering team took a new approach: the novel use of overlapping signals from light emitters and receivers embedded in a transparent waveguide layer that covers the functional areas of the finger.

The study was published online in IEEE/ASME Transactions on Mechatronics. It was funded by the National Science Foundation. "This project uses light and artificial intelligence to let robots learn to have a sense of touch, not unlike the way human infants learn to sense with touch," says Bruce Kramer, a program director in NSF's Directorate for Engineering.

"There has long been a gap between stand-alone tactile sensors and fully integrated tactile fingers -- tactile sensing is still far from ubiquitous in robotic manipulation," says Matei Ciocarlie, a mechanical engineer and computer scientist who led the work in collaboration with electrical engineer Ioannis (John) Kymissis. "We have developed a multi-curved robotic finger with accurate touch localization and normal force detection over complex 3D surfaces," Ciocarlie says.

The study demonstrates two aspects of the underlying technology that combine to enable the new results. The researchers used light to sense touch, and they designed the data to be processed by machine learning algorithms. Because there are so many signals, all partially overlapping with each other, the data are too complex to be interpreted by humans. The result is a fully integrated, sensorized robot finger, with a low wire count, built using accessible manufacturing methods and designed for easy integration into dexterous hands.

"Dexterous robotic manipulation is needed now in fields such as manufacturing and logistics, and is one of the technologies that, in the longer term, is needed to enable personal robotic assistance in other areas, such as healthcare or service domains," Ciocarlie adds.