Grasshopper numbers have declined more than 30% in Kansas grassland 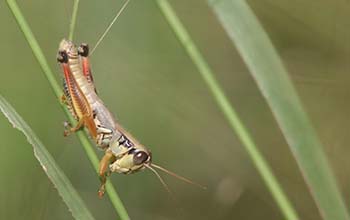 Scientists have tied grasshopper declines to the quality of prairie grasses.

A new study shows that grasshopper numbers have declined more than 30% in a Kansas grassland preserve over the past two decades. The results were published in the journal Proceedings of the National Academy of Sciences.

The paper reveals a potentially widespread threat to Earth's plant-feeders: the dilution of nutrients such as nitrogen, phosphorus, and sodium in the plants themselves due to increasing levels of atmospheric carbon dioxide.

Ellen Welti, an ecologist at the University of Oklahoma, led the National Science Foundation-funded study.

Grasshoppers are abundant consumers in grasslands -- a habitat that covers more than 30% of Earth's land mass and is the source of a majority of human crops. The same decline in plant quality revealed by Welti and her colleagues has recently raised alarms about the global human food supply.

"This decline in plant nutrient concentration poses a challenge for all animals that consume plants, including humans," Welti said.

The study adds to the growing evidence that some insect groups are declining in abundance. Such long-term data are rare but are a primary function of the National Science Foundation's LTER (Long Term Ecological Research) sites, including Konza Prairie -- a large protected tallgrass prairie reserve in northeast Kansas that provided the study's key data.

"One surprise was that grasshopper abundances in this large native tallgrass prairie reserve are declining," Welti said. "This grassland appears to be a stable and prime habitat for grasshoppers and yet even here, we are seeing 2% annual declines."

The grasshoppers have been surveyed at Konza for nearly 30 years, providing a rare and detailed breakdown of the fate of this important group of insects.