Hidden source of carbon found on the Arctic coast 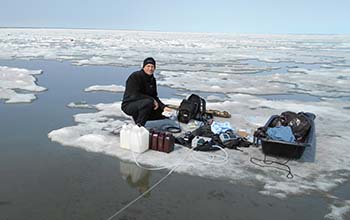 A previously unknown, significant source of carbon discovered in the Arctic has National Science Foundation-funded scientists surprised -- and concerned about what it may mean in an era of climate change.

In a Nature Communications paper, chemists and hydrologists from The University of Texas at Austin and other institutions present evidence of significant concentrations of dissolved organic matter entering Arctic coastal waters from the groundwater atop frozen permafrost. This water moves unseen from land to sea, but researchers now believe it carries significant concentrations of carbon and other nutrients to Arctic coastal food webs.

The research was conducted at NSF's Beaufort Lagoon Ecosystems Long-Term Ecological Research site, one in a network of NSF LTER sites around the globe.

Groundwater is known globally to be important for delivering carbon and other nutrients to oceans, but in the Arctic, where much water remains trapped in frozen earth, its role has been less clear. Scientists were surprised to learn that groundwater may be contributing an amount of dissolved organic matter to Beaufort Sea that is almost on a par with what comes from neighboring rivers during the summer.

"We have to start thinking differently about groundwater," said senior author James McClelland, a marine scientist at UT Austin. "The water that flows from rivers to the Arctic Ocean is pretty well accounted for, but until now the groundwater flowing to this ocean hasn't been."

Researchers had assumed that groundwater inputs from land to sea are small in the Arctic because perennially frozen ground, or permafrost, constrains the flow of water below the tundra surface.

"These findings demonstrate the increasing importance of groundwater transport to our understanding of carbon and nutrient cycling in Arctic coastal ecosystems," said Roberto Delgado, a program director in NSF's Office of Polar Programs.