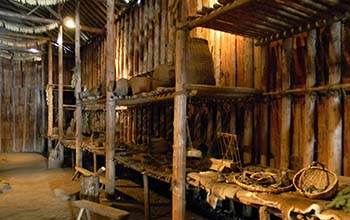 The results are published in the online journal PLoS ONE by Sturt Manning of Cornell University and John Hart of the New York State Museum in Albany.

The findings, Manning said, are helping to refine our understanding of the social, political and economic history of the Mohawk Valley region at the time of early European intervention. The Mohawk and Hudson river valleys were key inland routes for Europeans entering the region from the coast in the 16th and early 17th centuries.

The work is part of the Dating Iroquoia Project, involving researchers from Cornell, the University of Georgia and the New York State Museum, and supported by the National Science Foundation.

Manning said that the previous dating scheme was "flawed" and needed revision.

The standard timeline created for historical narratives of indigenous settlement, Manning noted, has largely been based on the presence or absence of types of European trade goods, for example, metal items or glass beads. But trade practices differed from one native community to another, and not all of them accepted contact with, or goods from, European settlers.

Bayesian analysis, Manning explained, is "a statistical method that integrates prior knowledge in order to better define the probability parameters around a question or unknown. In this case, archaeological and ethno-historic information was combined with data from a large set of radiocarbon dates in order to estimate occupation dates for a set of Mohawk villages across the 13th to early 17th centuries."

In previous indigenous site studies, where artifacts indicated trade interactions, researchers might assume "that trade goods were equally available, and wanted, all over the region" and that different indigenous groups shared common trade practices, he said.