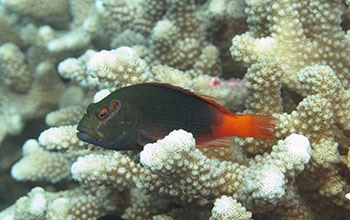 Arc-eye hawkfish on a coral reef in the South Pacific.

How can many species of hawkfish coexist in proximity on the same coral reef? The answer may lie in their individual diets.

Hawkfish are brightly colored reef fish that live in tropical oceans. Many reef fish reach their greatest diversity in the Coral Triangle, a swath of ocean in the tropical Western Pacific. But one genus of hawkfish, known as arc-eye hawkfish, has the greatest number of species in the remote islands of the Republic of Kiribati in the South Pacific.

Of the four hawkfish species found there (Paracirrhites nisus, P. xanthus, P. bicolor and P. arcatus), the first three are endemic to the Polynesian province, meaning they are found nowhere else. P. arcatus is found throughout the tropical Pacific.

National Science Foundation-funded researchers at the Scripps Institution of Oceanography and their colleagues wondered how these species could coexist on the same coral reefs.

By analyzing hawkfish gut contents and microbiomes, the scientists found that these fish have different diets. The findings are published in the journal Ecology and Evolution.

"One of the things that has always fascinated people about coral reefs is their tremendous biodiversity," said Beverly French, a researcher at Scripps and lead author. "It's a puzzle in ecology: How do many animals coexist in one place? One way is by partitioning resources."

The researchers conducted the study at sea, using genetic sequencing to discover what each hawkfish was eating. By comparing stomach contents and gut microbiomes, the scientists found that the endemic hawkfish species eat a higher percentage of other fish compared to P. arcatus. This trophic partitioning -- different food niches for each species -- could explain how hawkfish coexist on South Pacific reefs.

"It's an elegant case of ecological specialization," said Daniel Thornhill, a program officer in NSF's Division of Ocean Sciences. "By focusing on different prey, many similar hawkfish species can coexist in the same space on the reef."