Soot may be half the problem when it comes to cookstoves 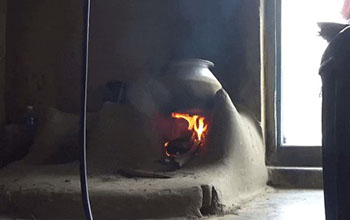 Organic carbon particles from cookstoves absorb as much sunlight as black carbon, if not more.

The telltale signature of a cookstove, commonly used to prepare food or provide heat by burning wood, charcoal, animal dung or crop residue, is the thick, sooty smoke that rises from the flames. Its remnants -- black stains left on walls and clothes and in the lungs of people, usually women, who tend to the stoves -- are a striking reminder of the hazards the stoves pose to human health and the environment.

But soot is only part of the story when it comes to environmental impact -- about half of it, it turns out.

As the temperatures in a cookstove begin to drop and the black smoke turns grayish-white, soot (or black carbon) is replaced by organic carbon. Despite the smoke's whitish appearance, the organic carbon particles absorb as much sunlight in the atmosphere as black carbon, if not more, National Science Foundation-funded scientists at Washington University in St. Louis have revealed.

And its health effects may be worse for the nearly 2.7 billion households worldwide that use them. The research was published in Environmental Science & Technology Letters.

To better understand the effects cookstoves are having on the environment and human health, Rajan Chakrabarty, an energy, environmental and chemical engineer, took his research to a pollution hotspot: Chhattisgarh, between New Delhi and Calcutta, in the heart of rural central India, where cookstoves are one of the biggest emitters of aerosols and greenhouse gases.

"Previous experiments had been carried out in a lab under controlled conditions, which are different from what you'll find in the field," Chakrabarty said.

For two weeks, Chakrabarty's team lived with residents in rural homes where people used mud chulhas, or cookstoves, to prepare food. The researchers ran 30 tests, cooking with different fuels that included wood, agricultural residue and cattle dung, all of which were locally sourced.

"We found the reality of a cooking cycle is a mix of black and white smoke," Chakrabarty said. The color black absorbs light, and white reflects it. "We had thought that the organic carbons counteracted the black carbon, to a degree," he said.

Added Jielun Sun, a program director in NSF's Division of Atmospheric and Geospace Sciences, "This research is an attempt to quantify the light absorption from different phases of burning in residential cookstoves, the flaming vs. the smoldering phases. The results could inspire more studies of aerosol radiation effects and a better understanding of climate change."