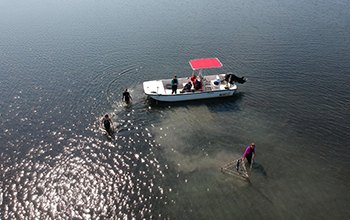 As carbon dioxide emissions continue to increase, scientists have recognized that seagrass meadows are important to mitigation because they have high rates of carbon storage. However, rising ocean temperatures threaten seagrass meadows and their ability to retain carbon.

The situation underscores the need for ecosystem data on the vulnerability and resilience of these meadows and on the realistic potential of seagrasses for long-term carbon sequestration.

Over an 11-year period, researchers at the National Science Foundation-funded Virginia Coast Reserve Long-Term Ecological Research site used innovative instruments to measure the metabolism of an eelgrass meadow that had been restored in 2001.

The results are published in the journal Limnology and Oceanography.

Throughout the study, the meadow experienced a unique sequence of conditions. In 2015, 14 years after the restoration began, a 90% die-off occurred, likely caused by high water temperatures in the early growing season.

A recovery period in 2016-2018 provided an opportunity to study the resilience of seagrass metabolism to temperature stress. By capturing data seasonally over many years, the team found that the seagrass ecosystem was in metabolic balance before the die-off but shifted to releasing significant amounts of carbon during the die-off, followed by a period of carbon gain during recovery.

The study suggests that seagrass meadow metabolism is variable, so frequent measurements are needed to gain realistic estimates of carbon sequestration over time. Scientists can use these data to assess how climate change is affecting seagrasses and the role seagrasses may play in mitigating climate change.

"Ecosystems are always changing, often in subtle but important ways," says Doug Levey, a program director in NSF's Division of Environmental Biology. "This study reveals how long-term changes in one ecosystem -- underwater seagrass meadows -- can have widespread impacts by determining where carbon goes."