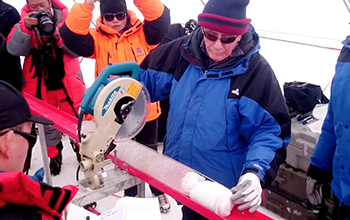 Ice from glaciers around the world, undisturbed for centuries, shows changes in how societies functioned throughout history -- and will likely hold a record of the current impact of the COVID-19 pandemic for future generations, scientists believe.

The story of how the pandemic is affecting societies around the world is still unfolding, but ice accumulating on high-elevation ice fields around the world and in Greenland is almost certainly collecting physical, chemical and biological evidence of this time, said National Science Foundation-funded researchers.

There are signs that the current COVID-19 pandemic is affecting Earth's atmosphere. As people stayed home and drove less, nitrogen dioxide and sulfur dioxide levels dropped over China and throughout much of the U.S. Both are potent pollutants that primarily form by burning gas and oil -- the fossil fuels that power most of our vehicles.

That decrease will be evident in the nitrate and sulfate levels in ice cores retrieved by future glaciologists, Thompson said. There might be other signs of the pandemic that future scientists find in ice that is forming now -- signs that today's scientists don't yet know about.

Snow and ice trap whatever is in the atmosphere at the time. Researchers know that includes chemicals, minerals, as well as microbes such as bacteria and viruses, and other organic material such as the stems and leaves of plants.

That means the cores act as a timeline of sorts, in some cases showing changes in the atmosphere year by year, much like the rings of a tree.