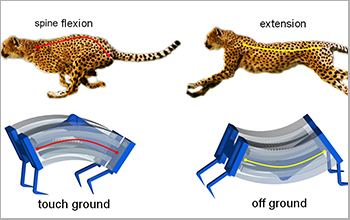 Inspired by the biomechanics of cheetahs, researchers have developed a new type of soft robot.

Inspired by the biomechanics of cheetahs, National Science Foundation-funded researchers have developed a new type of soft robot that is capable of moving more quickly on solid surfaces or in the water than previous generations of soft robots.

"Cheetahs are the fastest creatures on land, and they derive their speed and power from the flexing of their spines," says Jie Yin, a mechanical and aerospace engineer at North Carolina State University and corresponding author of a paper on the new soft robots. The paper is published in the journal Science Advances.

"We were inspired by the cheetah to create a type of soft robot that has a spring-powered, 'bistable' spine, meaning that the robot has two stable states," Yin says. "We can switch between these stable states rapidly by pumping air into channels that line the soft, silicone robot. Switching between the two states releases a significant amount of energy, allowing the robot to quickly exert force against the ground. This enables the robot to gallop across the surface, meaning that its feet leave the ground."

The new robots are also capable of running up steep inclines, which can be challenging or impossible for soft robots that exert less force against the ground. A video of the LEAP robot in action may be found at: https://youtu.be/Z5QAwAOxORo.

The researchers note that this work serves as a proof-of-concept, and are optimistic that they can modify the design to make LEAP robots that are even faster and more powerful.

Adds Siddiq Qidwai, a program director in NSF's Directorate for Engineering, "In the near future, soft robots will closely interact with people and perform essential services from caregiving to search and rescue operations. This innovative research brings those scenarios closer to reality by using the concept of bimodal stability, paving the way for robots that, like humans, will be able to perform multiple functions, such as running, swimming, and grabbing and lifting objects."